Current Robinson Lions Club members Ashley Boynes-Shuck and Sharon Boynes were mentioned in the May 2017 issues of the LION magazine and The Cauldron newsletter. Late Lion Leon Louis (originally misspelled in the publication as ‘Lewis’,) was also mentioned.

You can read the article online, here.

The Lions Clubs International picks one or two people to feature in the One Of Us section in each one of the 11 issues per year. This will be in both the print and online editions.

The print version of the LION Magazine goes out to over 1.4 million Lions Club members worldwide. This magazine is printed in 20 languages and has 32 editions — it’s even printed in braille!

An apology and correction will be issued in the July 2017 print issue due to the initial misspelling of Lion Lee’s name. It has since been corrected in the online version. 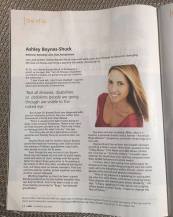